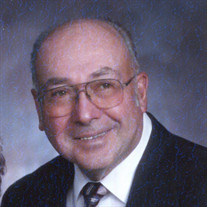 Donald “Don” J. Hermans, age 88 of Green Bay, passed into new life on Tuesday, February 1, 2022 at Carrington Assisted Living with his family by his side. He was born on July 29, 1933 in the Town of Champion to the late William and Evelyn (Bodart) Hermans. He was united in marriage to his high school sweetheart and love of his life, Shirley Pigeon, on October 11, 1952. Don attended and graduated from Luxemburg High School in 1951. Through the years he worked as a machine tender at Fort Howard Paper Company in Green Bay. He was proud of making paper on machine number nine and made and cherished many friendships with his crew from the mill. He simultaneously opened and operated Don’s Economy Printing, running the business from his basement and working long hours at the mill only to come home and continue working on the printing to serve his many customers in the Green Bay and surrounding communities. Don served SS Peter and Paul Catholic Church on its Buildings and Grounds Committee and over saw the church renovation that is still in place today. He worked for numerous Church picnics and did the Churches’ printing for many years as well as the printing for many of the other Catholic parishes in Green Bay. Don enjoyed music and sang in the local Green Bay chapter of Barbershop Choir, the SS Peter and Paul Church Choir, and with a more contemporary group called the Sounds Fantastic. Don served his community at New Community Shelter and was a Citizen Advocate for Aspiro. Don had many hobbies including gardening, tending to his yard, cooking (the famous varieties of the Hermans’ Chicken or Venison Booyah!), woodworking, and spending time with his beloved dogs Fritz, Julian, and Casper. He enjoyed camping and fishing with his family, spending many wonderful summers at Lynn Ann’s Campground on Big St. Germain Lake. Don enjoyed traveling and, in retirement, spent 17 years as a snow bird in Mesa, Arizona with his wife, Shirley. He traveled to Europe twice, with his most favorite memory of the Vatican and seeing the Pope. Don was an avid Packer fan and season ticket holder. His fondest memories were sneaking into the old City Stadium at East High School as a kid to attend the games and attending the famed “Ice Bowl” at Lambeau field. But by far, his greatest joy came from spending time with his family, living his faith, enjoying 61 years of marriage with his wife, Shirley, and attending the many activities and celebrations of his children and grandchildren. Left to cherish Don’s life are his five children, Lynn (Allan) Dorner, rural Luxemburg, Sue (Doug) Schomberg, Burlington, WI, Mary (Larry) Connors, Allouez, WI, Mark (Jane) Hermans, Oshkosh, WI, and Julie Mody, Paris, France; twelve grandchildren, Melissa (Tom) Morris, Kim (Brian) Wick, Sarah Dorner, Samantha (Aaron) Wojnowiak, Leah (Josh) Barr, Shannon Connors, Matthew Connors (fiancée Emma), and Meghan Connors (fiancé Scott), Alison (Patrick) Ostroth, Brianna (Kevin) Donlon, John (Hanna) Hermans, and Sanjay Mody; great grandchildren, Brendan and Sydney Ostroth, Kaylee, Grayson, and Noah Wick, Adilynn Schroeder and William Morris, Logan and Louis Wojnowiak, Mark Hermans, and Claire and Valerie Donlon; great, great grandson, Adrian Cerroblanco; brother, Wayne (Donna) Hermans; sisters in law, Donna Hermans and Geraldine Pigeon; and brother in law, Ronald Raasch. He was preceded in death by his parents; loving wife Shirley; brother Larry Hermans; sister in law, Patricia Raasch; and brother in law, Gerald Pigeon. Family and friends may gather and celebrate Don’s life from 4:00 to 8:00 pm on Sunday, February 6, 2022 at Malcore Funeral Homes- East (701 N. Baird St., Green Bay, WI). A wake service will start at 7:00 pm with prayer, eulogy, and sharing of stories. Visitation will continue on Monday, February 7, 2022 from 9:30 to 10:30 am at Malcore Funeral Home. A mass of Christian burial will be celebrated at 10:30 am on Monday, February 7, 2022 at SS Peter and Paul Catholic Church (710 N. Baird St.), with Father Jose Lopez officiating. Entombment will be at Allouez Chapel Mausoleum. A celebration lunch will be served at the Rendezvous, Cty Rd. N, rural Luxemburg, at 12:30 pm following the service. Don lived a life of strength, service, courage, and integrity that served as a model for his children and grandchildren and left them with a wonderful legacy to carry on in their lives. The family would like to extend a heartfelt thank you to the staff at Carrington Assisted Living and Unity Hospice and to his primary care physician, Dr. David Richards for all the wonderful care and support given. A special thank you is extended to Bill and Colleen Terrien, his long time neighbors, who were always available and there for our Dad to help with anything he needed. Your care and generosity will always be in our hearts. As Don cared for his loving wife Shirley in her last years as she struggled with Alzheimer’s Disease, donations in Don’s name may be made to the Alzheimer’s Association and for memorial masses in Don’s name.

The family of Donald "Don" J. Hermans created this Life Tributes page to make it easy to share your memories.

Send flowers to the Hermans family.