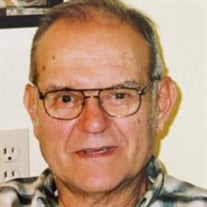 Donald R. Collins, 85, Green Bay, passed away peacefully Friday afternoon, March 11, 2022, at a local hospital with his loving family by his side. Born January 21, 1937, in the Town of Scott, he is the son of the late Richard Collins and Edna McMonagle, however, most of his stories he shared from his childhood were about living with Uncle Corky. He met Karen Deprey at age 15 and was welcomed into the Deprey clan as one of their own. On September 26, 1959, they were wed at Saints Peter and Paul Church. He went on to be the father of four girls. He started his career as an auto mechanic early in his life. He started at Bogda Motors where he met Larry Hilbert. They fast became best friends. The family spent many weekends at Larry and Margie's farm in North Chase. He then worked at Cuene Buick and stayed on when it became Brennan Buick. Don retired after 42 years of service at Cuene/Brennan Buick. As a younger man, his hobby was driving stock cars at local and state tracks. He stopped driving after the birth of his first child but continued to be a part of pit crews. Cars were not the only trade he knew: electrical, plumbing, carpentry, the list went on. In his retirement, he became the primary caregiver to his wife, Karen, and continued until her death in 2018. His own illness was hard on him because it took away his ability to work with his hands. His advice was sought out by many and always well respected. Donnie was a terrific man. He would help anyone with any project at anytime. Donnie is survived by his four girls: Tracy Collins (Abe Axelson), Beth (Glen) Flynn, Loni (Ted) Skubal and Amy (Judd) Miller; eight grandchildren: Nicole (Ben) Johnson, Alisha (Curtis) Valentine, Benjamin (Lauren) Flynn, Daniel Flynn (fiancee' Mikayla Neveau), Quinn Miller, Aaron, Colin, and Hanna Skubal; one great-grandson, Mason Johnson; members of the Deprey clan, Connie Letourneau, Wayne Deprey, Jim (Mary) Deprey, Ron Deprey, and Jeri Deprey; and other relatives and friends. He was preceded in death by his loving wife of 59 years, Karen; sister, Joyce (Wayne) LaPlante; brothers-in-law, sisters-in-law, and many other relatives. Visitation at Malcore (East) Funeral Home, 701 N. Baird Street, Saturday March 26, 2022, from 2:00 pm until the time when there will be sharing of memories at 5:30. He will be laid to rest with his wife at Allouez Catholic Cemetery. The Collins family extends a special thank you to his caregiver, Julia; and the staffs of Bellin Hospital, Unity Hospice and Curative Crossroads Program.

Donald R. Collins, 85, Green Bay, passed away peacefully Friday afternoon, March 11, 2022, at a local hospital with his loving family by his side. Born January 21, 1937, in the Town of Scott, he is the son of the late Richard Collins and Edna... View Obituary & Service Information

The family of Donald R. Collins created this Life Tributes page to make it easy to share your memories.

Send flowers to the Collins family.