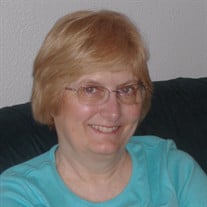 Diane (Francois) Mielke, 66, Green Bay, passed away unexpectedly on December 11, 2018. Diane was born on September 28, 1952, to the late Robert and Rosemary Francois in Green Bay, WI. On September 14, 1974, she married Steve Mielke in Green Bay and together they lovingly raised three children. Diane will be remembered as loving wife, mother, and grandmother. Her favorite hobbies included crocheting, cross stitching, and feeding the squirrels and wildlife in her backyard. Diane’s lifelong dream was to go whale watching in Alaska, which she experienced with her family in the summer of 2009. Diane is survived by her husband, Steve Mielke; daughter, Julie (Mielke) Burd (husband, Eugene); sons, Greg Mielke (wife, Sarah) and Matt Mielke; grandchildren, Ethan, Cameron, and Alexander; and her grandpuppy, Fozzy Bear. She is preceded in death by her parents Robert and Rosemary Francois and her brother Alan Francois. In accordance with Diane’s wishes, a private funeral has been held for family members. Diane’s family thanks the ICU Staff at St Vincent’s Hospital for their compassionate care, and extend their gratitude and love to everyone who has shared their thoughts and prayers during these difficult times. To honor Diane’s memory, please consider donating to the local Green Bay area Humane Society. Donations can be made in her honor at the following website: https://www.wihumane.org/donate

The family of Diane Mielke created this Life Tributes page to make it easy to share your memories.

Send flowers to the Mielke family.