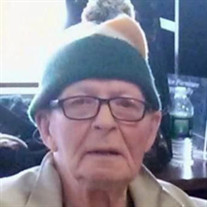 Dennis Whiting, 79, Sobieski, passed away, peacefully Monday morning, November 23, 2020, after a long illness surrounded by his family. Born in Green Bay October 30,1941, he is the son of late Merle and Myrtle Whiting. In 1962 he married Jane Whiting at SS Peter and Paul Catholic Church, and she preceded him in death on October 6, 2003. He owned and operated Denny's Place (corner of Bellevue and Cass) from 1991 to 2001. Since then he has enjoyed his retirement with his children, grandchildren, and great grandchildren. He enjoyed watching the Packers, NASCAR, cooking, and fishing. Dennis was loved by many for his sense of humor, his love for his family, and he will be dearly missed. Dennis is survived by his three children, Jeffrey (Shelly) Whiting of Sobieski, Lisa Whiting of Green Bay, and Kevin Whiting of Green Bay; five grandchildren, Adam, Amanda (Marcus), Derek (Jill), Kagen, Chancelor; seven great grandchildren, Ava Jane, Breyhten, Claire, Brant, Arlo, Lyvelle, and Olivia; brother, Cal (Pat) Whiting; sister, Beverly DeBauche; special friends, Tom (Elaine) LaLuzerne, Vicki (Russ) Roberts, Paul (Amy) King, and Jody (Wayne) Blom; many nieces, nephews, and friends. He was preceded in death by his parents; wife, Jane; brother, Ronnie Whiting; brother-in-law, Roger DeBauche; mother and father-in-law, Orville and Doris Bourguignon; niece, Kendy Lemmen; Grandpa-in-law, Bill Malcore. Due to Covid-19 a service will be held at a later date. Burial in Mt. Olivet Cemetery in De Pere. Malcore Funeral Home is assisting the family. While Denny's time at Cardinal Ridge he developed very close relationships with the staff. The family would like to extend a special thank you to the staff for their compassion and care. Also a special thank you to all of Dennis' doctors who cared for him over the years.

Dennis Whiting, 79, Sobieski, passed away, peacefully Monday morning, November 23, 2020, after a long illness surrounded by his family. Born in Green Bay October 30,1941, he is the son of late Merle and Myrtle Whiting. In 1962 he married Jane... View Obituary & Service Information

The family of Dennis Whiting created this Life Tributes page to make it easy to share your memories.

Send flowers to the Whiting family.