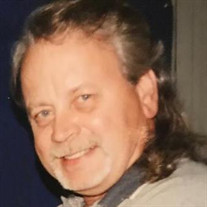 Dennis M Process, 66 Green Bay, found peace with his soul while at home on Thursday Mar 8th, 2018. Born in Green Bay on September 26, 1951 to late John Louis and Ethel Ann (DeMuth) Process. Dennis is a graduate of Premontre High School Class of 1969. Upon graduating Dennis was employed by Pauly Cheese and later at Green Bay Packaging Coated Products Division until his health caused him to retire. Dennis married Debi Parczick in September 1975 and two years later the best thing happened to him and he became a father. The bond between the two was immediate, they enjoyed so many things especially road trips to South Dakota and any trip along a tree-lined quiet highway on his Harley to just get out and see what there is out in the world. Dennis was also an avid softball player in the slow pitch league throughout the years playing mainly for The Den in Green Bay. He also coached his daughter Danielle’s softball team for several years. The love of the sport by the family led to his greatest pastime, cheering for his grandson Evan, his “little buddy”, throughout his baseball career from T-ball all the way through high school, regular league games and traveling tournament teams. If he could be there he was there. Even if it meant a seven hour drive one way. He wasn't going to miss out if he could help it. While traveling to baseball games all over the state it also allowed him to spend time with his other grandson, Nolan, his “little pudge”, and spoil him at the concession stands each day. To Dennis, his family was always very important and always a priority. He will also be remembered for his love of the Packers, Brewers, Harley Davidsons and time spent outdoors with his family. He also loved to grill a good steak. Any given time of day he could be found grilling steaks outside and cooking chili inside. You never left hungry from his house. One of his proudest achievements was becoming a Certified Scuba Diving Instructor through the Professional Association of Diving Instructors. Being a PADI instructor allowed him to dive in the Bahamas many times but he also enjoyed diving in Lake Michigan quite often. Dennis is survived by his daughter Danielle (Brian) Basten and 2 grandsons Evan and Nolan Basten; former wife and friend, Debi Nitka. He is further survived by brother Jerry (Marion) Process and their children Sandy, Steve, Stephanie, Sherri all of Green Bay He is also survived by a nephew and niece John Henry and Jenna. In addition to his parents he was preceded in death by his brother, Jim Process; and his sister, Sue Process. Visitation at Malcore (East) Funeral Home, 701 N. Baird Street, Thursday, March 15, from 5pm until the time of the service. Memorial Service, 7pm Thursday, at the funeral home. The family extends a special thank you to the caring staff of Villa Hope in Appleton for the care they have provided Dennis over the years.

The family of Dennis M. Process created this Life Tributes page to make it easy to share your memories.

Send flowers to the Process family.