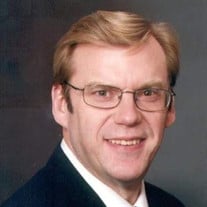 Dennis A. Nuetzel, 60, Green Bay, passed away July 24, 2019, surrounded by his family. Born on November 29, 1958, he is the son of the late LeRoy and Marian (Cass) Nuetzel. Dennis graduated from Wild Rose High School the class of 1977 where he was a star football player playing as nose tackle and center and were state champs in 1976. He continued his football career at the University of Wisconsin River Falls where he majored in Broadcast Journalism. He also was an All Star Wrestler under the name Hoss Cassidy. Dennis was a long time Radio personality and worked at WDUZ, WDUX, a radio station in Alabama, and Y100 under the personality of Dennis Mitchell. Dennis also worked at AT&T where he retired in 2018. He married the former Carol Balanza on March 30, 2002. He loved HAM Radio and was a member of the HAM Radio Association. Dennis was a long time member of Central Assembly of God Church. He loved all sports especially boxing, and football-especially the Green Bay Packers. He had a passion for photography, old and new cameras, and there was never a time when there wasn't a camera in his hand. For Dennis family was everything-he was present for all family functions. He was a great friend to everyone. He loved kids and although he had none of his own, he had many Godchildren and even sponsored a child in the Philippines named Ella. He is survived by his wife, Carol; father-in-law, Felix Balanza; sister, Debra (Greg) Strout; sister-in-law, Leah A. Nuetzel; nieces and nephews, Joshua Nuetzel, Daniel (Becky) Nuetzel, Jr., Shaina (Jerald) Updegraff, Dakota (Alicia) Nuetzel, Christin Gerlach, Wyatt Gerlach; Godchildren, Josh Nuetzel, Jay Lehner, Bailey Arndt, Bella Czeskleba, Olivia Hokenson and Denise Kate Balanza; also survived by Carol's siblings in the Philippines, and a sister and siblings in London, brother-in-law in Dubai; four legged companion, Angel. Dennis was preceded in death by his parents; brother, Daniel L. Nuetzel, Sr.; sister, Lee Ann Nuetzel; mother-in-law, Valentina Balanza; great nephew, Noah Williams; special aunt and uncle, Wally and Emmy Erickson. Visitation at Central Assembly of God Church, 831 Schoen St., Saturday, July 27, from 10 AM until 12 PM (noon). Visitation will continue Monday July 29, at Malcore Funeral Home, 701 N. Baird St. from 11 AM until the time of the service at 1 PM. The family would like to extend a special thank you to the staff of Aurora BayCare Hospital and Da Vita Dialysis. Also to everyone who came and supported Dennis over the last few years and in his last moments.

Dennis A. Nuetzel, 60, Green Bay, passed away July 24, 2019, surrounded by his family. Born on November 29, 1958, he is the son of the late LeRoy and Marian (Cass) Nuetzel. Dennis graduated from Wild Rose High School the class of 1977 where... View Obituary & Service Information

The family of Dennis A. Nuetzel created this Life Tributes page to make it easy to share your memories.

Send flowers to the Nuetzel family.