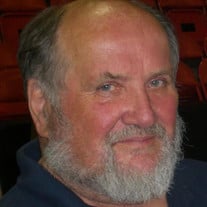 Dean Roger Belanger (“Deano”), 79, son of Ralph Sr. and Marge (VerBoncouer) Belanger, died peacefully on January 7, 2021 at his home in Green Bay, WI. He was born on March 11, 1941. Dean was a proud veteran who served in the United States Navy and until recently was active in the American Legion, Machickanee Post 523. Dean believed in living life to its fullest. As a racing enthusiast, Dean would race anything he could get his hands on. He raced stock cars in Kaukauna and ran in multiple road rallies. He raced midgets and snowmobiles for the Pabst Blue Ribbon race team. He was also known to have raced an inner-tube, a bathtub and even a bed. After retiring from Fort Howard Paper in 1996, Dean and his late wife Elaine travelled the country on their Gold Wing motorcycle and were active members of the Gold Wing Road Riders Association Chapter M. Dean had a servant’s heart and gave back to his community as a foster parent, a scout leader, a civil defense officer and a volunteer firefighter with the Abrams Fire Department. Dean is survived by his children, John (Mary) Belanger of Green Bay, Robert Belanger of Seymour; Elaine’s children, Lou (Amanda) Lepere of Rhode Island, Debbie (Mike) Ament of Green Bay, and Cindy (Jason) Splan of McFarland, WI; Grandchildren Paul (Stephanie), Christopher, William (Kim), Samantha (Fiance’ Todd Erickson), Ozzy, Lauren, Brett, Bryce, Vanessa, Mallory (Adam), Katie (Daniel), Emma, Jackson, Mila; nine great-grandchildren and one great-great granddaughter. He is also survived by his sisters Cynthia Fuller and Joanne Peterson, several nieces, nephews and cousins, his former wife Mary Ann (Eland) Richert, and eight step-children from his marriage to the late Marybeth Vanden Bloomer. He is preceded in death by his wife Elaine Hansen-Belanger, his infant child Paul Michael Belanger, his parents Ralph and Marge Belanger, his brother Ralph Belanger Jr., his sister Merilla (“Mert”) Konitzer, his brother-in-laws Dick Fuller, Ken Konitzer and Clyde Peterson, his former wife Mary Beth Vanden Bloomer and one step-son Daniel "Joe" Vanden Bloomer. Visitation will be held at Malcore (West) Funeral Home, 1530 W. Mason St on Saturday January 16th, from 10:00 am until the memorial service at 12:00 PM. Masks will be required and social distancing will be observed. For those who cannot attend in person, the service will be live streamed and recorded. To join us live or to watch the service later please visit https://www.malcorefuneralhome.com/obituaries/Dean-Belanger/ and click the link on Dean’s tribute wall. In lieu of flowers, memorial donations in Dean’s memory will be presented to veterans organizations including the American Legion. The family would like to extend a special thank you to the loving and caring staff of Allouez Parkside Village and Heartland Hospice.

The family of Dean Belanger created this Life Tributes page to make it easy to share your memories.

Send flowers to the Belanger family.