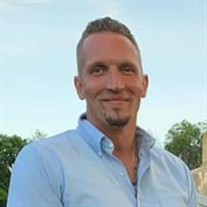 David John Peters, 38, passed away unexpectedly at home in Green Bay, WI on Feb. 19, 2021. He was a father, a life-changer, and the first person to give away his last dollar if it meant helping someone in need. He was born in Plymouth, WI on Nov. 14th, 1982 to Robert and Mary Lou Peters. Growing up, Dave idolized his big brothers, sticking to them like a second shadow. After graduating from Plymouth High School in 2001, Dave pursued factory work, received his masonry certificate from Northeastern Tech College, and most recently worked for Tradesmen International. Dave could always be found helping others, serving as a certified recovery coach and the executive director/founder of the nonprofit support group, "Never Give Up." When COVID hit, support groups, churches, and gyms closed their doors. These sanctuaries were no longer available to people coping with substance abuse and mental health problems. Dave filled the need with a few taps of his phone, founding “Never Give Up (Big Change)” on Facebook. Today, the support group has nearly 12,000 followers from every state and around the world. Dave hoped to establish housing with the resources needed to help people transition from prison. He volunteered to support prison reform and mental health task forces, and served as co-leader of the recovery team for the New Hope Coalition task force. Loud, funny, energetic, and big-hearted, Dave devoted his life to these causes because he struggled for years with the same demons. He paid dearly for his addiction, missing out on precious time with his young daughter, Marissa, who he loved more than anything. His face glowed when he could be with her. Thankfully, Dave's is a story of redemption. After a generous offer from his sister-in-law, he completed a rehabilitation program at the Jackie Nitschke Center. Dave turned his life around, and found his purpose: to help and give hope to others. Dave is survived by his daughter, Marissa Mae Peters of Sheboygan; parents, Robert and Mary Lou Peters of Howards Grove; brother and sister-in-law, Jason and Sara Peters of Sheboygan; brother, Paul Peters (Angie Keener) of Fond du Lac; sister and brother-in-law, Natalie and Bill Wellman of Albuquerque, NM; nephew, Anders Peters of Dover, DE; aunts and uncles, Bill and Karen Renk of Plymouth, Randy and Lisa Schultz of Sheboygan, Steve and Lisa Ferguson of Sheboygan, Angie and Chuck Gilbert of El Cajon, CA; and other relatives and friends including his lifelong buddy, Tony Fleischman. He was preceded in death by his sister, Steffanie Peters and grandparents, Steve and Lois Ferguson. Due to COVID, a celebration of life will be announced at a later date when loved ones can gather outside. A note from Dave's family: We've no doubt that the Never Give Up (Big Change) group will one day achieve Dave’s dream. He was a man on a mission, inspired by his daughter to never give up. Dave loved God, his family, and his friends and made us all very proud. We miss you and love you, David John.

David John Peters, 38, passed away unexpectedly at home in Green Bay, WI on Feb. 19, 2021. He was a father, a life-changer, and the first person to give away his last dollar if it meant helping someone in need. He was born in Plymouth, WI... View Obituary & Service Information

The family of David John Peters created this Life Tributes page to make it easy to share your memories.

David John Peters, 38, passed away unexpectedly at home in Green...

Send flowers to the Peters family.