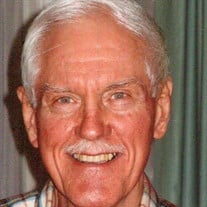 David M "Dave" Otto, 83, passed away peacefully, November 26, 2021, at a local hospital. Born February 18, 1938, to Carl and Hellen (Williams) Otto in Wisconsin Rapids, Wisconsin. Graduated from Lincoln High School in 1956 and Ripon College in 1960 with a BA degree in Political Science. Dave was Phi Beta Kappa and earned an MS in Journalism from Northwestern University in 1962. Dave enlisted in the Army reserve and served for 6 years. He joined the Green Bay Press-Gazette on January 1, 1962, the beginning of a 40-year career as a reporter. He covered the courthouse for 5 years, twice earning Gavel Awards from the American Bar Association. He was the only Press-Gazette writer to win this award. The rest of his career was as the Press-Gazette Outdoors Writer. His weekly column, Plugs & Slugs, was very popular, as was his annual Report from the Lake. Among his many awards were the Scripps Howard Award for conservation writing, and the Gordon MacQuarrie Award from the Wisconsin Academy of Arts and Sciences. He was a co-founder and past president of the Wisconsin Outdoor Communications Association. He also wrote numerous free-lance stories for magazines like Wisconsin Sportsman and Outdoor Life. He was a member of First United Methodist Church for over 50 years, volunteering in many ways. He was a co-founder of the church's Food Pantry, now called the Goodwill Place. After retiring in 1998, he volunteered for 15 years at Howe School, working with 4th and 5th graders on their reading and writing. He was known by students and staff alike as Mister Dave. He married Karen Van Epps in 1962 in Weyauwega, WI. He married Barbara O'Leary on May 23, 1987 on the shores of Green Bay at Peninsula State Park in Door County. He is survived by his wife and his 3 children - Jon (Laurie) Otto of Lake Mills, WI; Christine (Brian) Frye of Federal Way, WA; and Kathryn (Douglas) McLeod of Middleton, WI; and grandsons Logan and Davis Otto, David Frye, and Jon (JJ) McLeod. Visitation at First United Methodist Church, Grren Bay, 501 Howe St., Green Bay, Saturday, May 21, 2022, from 9:30 AM until the time of the memorial service at 10:30 AM. Memorials in David's name may be directed to First United Methodist Church Goodwill Food Pantry. https://www.fumcgb.org/give The family extends a heart-felt thank you to the caring staffs of Age Well Center for Life Enrichment and Bellin Hospital Malcore (East) Funeral Home is serving the family.

The family of David M. "Dave" Otto created this Life Tributes page to make it easy to share your memories.

Send flowers to the Otto family.