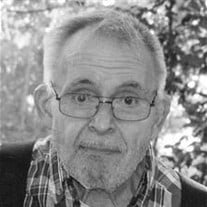 David Henry Crehore, 77, Allouez, died Friday, January 10th at home with family near his side. He was born November 17, 1942 in Lorain, OH, son of the late David and Charlotte (Lester) Crehore. Dave was graduated from Lincoln High School in Manitowoc, WI, class of 1960. He earned his bachelor’s degree from the College of Natural Resources at UW-Stevens Point, and a master’s degree in journalism from UW-Madison. Dave also served in the U.S. Navy as a corpsman and dental technician from 1963-1967. He was stationed at San Diego and at Naval Station Great Lakes in IL. He worked for the Wisconsin Department of Natural Resources. First as an LTE in Madison, then in 1976, becoming the Public Information Officer at the DNR office in Green Bay. He wrote speeches, press releases, magazine articles, took photographs, coordinated with the media, and answered the public’s questions about environmental quality and usage of resources in northeast Wisconsin. He retired in 2000. Dave loved the outdoors. He loved to fish for smallmouth bass, hunt grouse, take landscape photographs, and go birding. He also shot skeet for many years, often taking “high gun” honors in leagues at the Brown County Sportsmen’s Club. Dave also wrote two books, Sweet and Sour Pie: A Wisconsin Boyhood and The Baileys Harbor Bird and Booyah Club. Sweet and Sour Pie was read on WPR’s “Chapter a Day” in 2009. He was also a violinist. Beginning at a very young age, he studied with Ken Byler, attended Interlochen Arts Camp, and continued playing throughout his life. He played in the Green Bay Symphony and then the Green Bay Civic Symphony over a span of 30 years. During that same time, he was also a founding member of the Heritage String Quartet, performing at 700 weddings in northeast and central Wisconsin. Dave was married to his wife of 52 years, Joanne (Hecker) Crehore, on August 19, 1967. Other survivors include daughter Amy (David) Perl, and their three children, Sarah, Emily, and Katie, Edwardsville, IL; and son Tom Crehore, Allouez. In addition to his parents, David was preceded in death by Joanne’s parents, Elmer and Dorothy (Sorenson) Hecker. A Celebration of David’s Life will be held in the spring for family and friends. Malcore Funeral Home is assisting the family. Online condolences can be expressed at www.malcorefuneralhome.com. A special thank you to Unity Hospice for the care and compassion shown to David and his family. In lieu of flowers, donations can be made to the Civic Symphony of Green Bay, PO Box 302, Green Bay, WI 54305-0302; The Nature Conservancy, Attn: Treasury, 4245 North Fairfax Drive, Suite 100, Arlington, VA 22203-1606; Parkinson’s Foundation, 200 SE 1st Street, Suite 800, Miami, FL 33131.

David Henry Crehore, 77, Allouez, died Friday, January 10th at home with family near his side. He was born November 17, 1942 in Lorain, OH, son of the late David and Charlotte (Lester) Crehore. Dave was graduated from Lincoln High School in... View Obituary & Service Information

The family of David H. Crehore created this Life Tributes page to make it easy to share your memories.

Send flowers to the Crehore family.