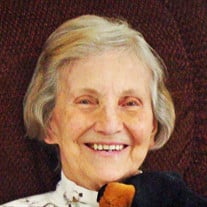 Darleen I. Jenquin, 94, Green Bay, passed away Friday morning, May 10, 2019, at a local care facility. Born December 3, 1924, in Door County, she is the daughter of the late Louis and Inez (Hanrahan) Jacquart. Darleen is a graduate of Brussels High School, Class of 1941. She married Ralph C. Jenquin on October 1, 1941, at St. Louis Church, Dyckesville. The couple farmed at Little Sturgeon until 1953 and then moved to Green Bay. Ralph preceded her in death unexpectedly on June 27, 1986. Darleen was a member of Saints Peter and Paul Parish since 1953. She was a dedicated wife and mother who did whatever she could to help support her growing family. Darleen was a long-time volunteer for the American Heart Association and the Green Bay Chapter of the American Red Cross. She was also an avid reader who loved to work on crossword puzzles and jigsaw puzzles. Darleen is survived by seven children and their spouses, Patricia Rahikainen, Robert (Cathy) Jenquin, Kerry (Bonnie) Jenquin, all of Green Bay, Catherine (Steve) Alper, Estes Park, CO, Jerome “Toby” (Jody) Jenquin, Madison, WI, Lauren Jenquin, Green Bay and Richard Jenquin of Elkhart, IN; 16 grandchildren, 15 great-grandchildren, and 4 great-great-grandchildren. She was preceded in death by her husband, Ralph; infant child, Nicholas; two brothers, Herbert and Jerome; son-in-law, Toival Rahikainen. Visitation at Saints Peter and Paul Church, 710 N. Baird Street, Wednesday, May 15, 2019, from 10:00am until the time of the funeral. Funeral Mass 11:00am Wednesday at the church. Burial in Fort Howard Memorial Park. Malcore (East) Funeral Home is serving the family. Darleen’s family extends a very special thank you to the caring staffs of Carrington Assisted Living and Heartland Hospice

Darleen I. Jenquin, 94, Green Bay, passed away Friday morning, May 10, 2019, at a local care facility. Born December 3, 1924, in Door County, she is the daughter of the late Louis and Inez (Hanrahan) Jacquart. Darleen is a graduate of Brussels... View Obituary & Service Information

The family of Darleen I. Jenquin created this Life Tributes page to make it easy to share your memories.

Send flowers to the Jenquin family.