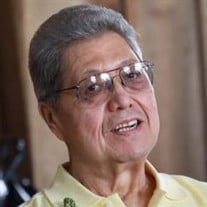 Dale “Chuck” King, 70, Green Bay, passed away Tuesday, March 20, 2018 at home. Born April 8, 1947, in Green Bay, he is the son of the late Jacob and Genevieve (Pecore) King. Chuck graduated from East High School, Class of 1965. He married the former Linda Wondrash on Oct. 14, 1967. Chuck was a dedicated employee of Georgia-Pacific for over forty years, retiring in 2008. He was an avid outdoorsman who especially enjoyed hunting and fishing. He cherished times with his family, playing cards and attending his grandchildren’s horse riding lessons and shows. Chuck is survived by two daughters, Jenny (Eric) Vandevelde of Casco and Angie King of Mandan, ND; grandchildren, Shawn (Rachel), David (Katlynn), Kendal and Erika; one great-grandson, Jackson; sisters-in-law, Marilyn King and Rena King; brother-in-law, Joseph Greatens; and many nieces and nephews. He was also preceded in death by an infant son, David; siblings, Marie (Gordon) Heimke, Harriet (Larry) Vanden Heuvel, Marlene Greatens, Donald (Jackie), Larwin, Wayne (Sallie), Gerald, Glen, and Sharon King; former wife and friend, Linda King Willman. Per Chuck’s wishes, no funeral service will be held. Malcore (East) Funeral Home is serving the family. Chuck’s family extend a special thank you to Dr. Flood at the Oneida Health Center for his many years of dedicated, caring service. Chuck will be remembered for his dedication to his family; he freely shared his many life-lessons and his entire being with all those he held dear.

The family of Dale "Chuck" King created this Life Tributes page to make it easy to share your memories.

Send flowers to the King family.