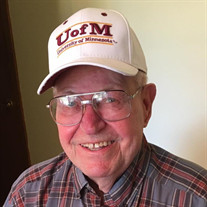 Dale Isaacson, 84, Green Bay, WI passed away June 6, 2020 due to complications from a fall at home. He graduated in 1954 from West High School in Minneapolis where he played football and wrestled. He was a Sergeant in the Minnesota Army National Guard for 8 years, which he is very proud of. On September 12, 1959 he married Joann Wieman at Our Redeemer Lutheran Church in Wabasha, MN and she preceded him in death on April 15, 2017. Joann and Dale began their family in Minnesota until Dale’s job took them to Green Bay, WI. He started in Rochester, MN at Standard Oil Company. Dale was transferred to Green Bay to work with AP Parts Manufacturing out of Toledo, OH for many years, making many lifelong friends, while traveling all over in sales. In his retirement years he worked with Condon Oil in Ripon, WI. Dale was a member of the Moose Lodge in Green Bay and was the President of the Rod & Gun Club, helping with Packer game fish frys, Ice fishing tournaments and establishing scholarships for students at the University of Stevens Point. He was an avid outdoorsman taking many trips to Canada fishing, pheasant and duck hunting out west in Montana, North Dakota and in the sloughs of the Mississippi. He enjoyed spending time at the log cabin he built in the Upper Peninsula of Michigan where he loved the beautiful scenery and wildlife. Dale also enjoyed golfing and was a history buff, watching old classics especially war movies and old westerns. Dale was a big sports fan, especially baseball, growing up a Minnesota Twins fan and adding the Milwaukee Brewers on his move to Green Bay. Dale thoroughly enjoyed the Green Bay Packers, being a season ticket holder for many years and even attended the Ice Bowl. Dale was a proud fan of his kids athletic events attending many games through the years also continuing this with his 3 grandchildrens games as well. He loved old Jazz music, stopping many times at different Jazz venues throughout his travels. A lifelong animal lover, he relished the time spent with his 2 springer spaniels, Jazz and Buster and his spunky cat, Toby. Dale is survived by his two children, Pete Isaacson of Green Bay, and Barbara (William) Denis of DePere; three grandchildren, Bailey, Kasey and Isaac Denis; brother and sister-in-law, Delores Eastman and Dean Kirkland; many other nieces and nephews. He was preceded in death by his parents; wife, Joann; sister, Deane Dolores Anfinson (Don), niece, Nancy Marie Anfinson; sisters and brothers-in-law, Betty Jane (Donovan) Markey, Dorothy Kirkland, Kenneth (Loretta) Wieman, Norman Eastman. Visitation at Malcore Funeral Home, 1530 W. Mason St., Friday, June 26, from 4 PM until 7 PM. Dale will be laid to rest at RiverView Cemetery in Wabasha, Minnesota next to his wife, at a later date. We would like to Thank the ICU and 7th floor staff at St. Vincent's Hospital, Dr. James Clemens for updating us and being that familiar face to him, when family couldn’t visit. And a special thank you to Gina Schultz, a friend of the family, for spending countless hours of long conversations, home cooked meals, many laughs and some tears with him through the last years with him. In lieu of other expressions of sympathy please direct donations to SPCA, St. Labre Indian School, St. Jude Hospital, HSUS Animal Organization and the Humane Society of United States. THERE ARE SOME PEOPLE IN LIFE THAT MAKE YOU LAUGH A LITTLE LOUDER, SMILE A LITTLE BIGGER, AND LIVE JUST A LITTLE BIT BETTER.

Dale Isaacson, 84, Green Bay, WI passed away June 6, 2020 due to complications from a fall at home. He graduated in 1954 from West High School in Minneapolis where he played football and wrestled. He was a Sergeant in the Minnesota Army National... View Obituary & Service Information

The family of Dale Isaacson created this Life Tributes page to make it easy to share your memories.

Send flowers to the Isaacson family.