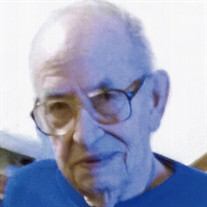 Clifford La Fave, 88, Green Bay, passed away July 12, 2019. Born on July 6, 1931, in Green Bay, he is the son of the late Joseph and Laura La Fave. Clifford served our country in the United States Air Force from 1951-1954. He married the former Dorothy Bertrand on October 1, 1955, and she preceded him in death on June 18, 2009. For forty years he worked for The Red Owl in the warehouse. Clifford was a member of VFW Post 9677. He enjoyed trips to the casino, fishing, and visiting his brother in Wyoming. Clifford was known for his animated Christmas toys. He loved spending time with his grandchildren and great grandchildren. He is survived by his three children, Saundra (David) Davies, Judy (William) Motquin, and Sue (George) Gottfried; eight grandchildren, David Davies, Amy (Mark) Olson, Jason (Nicole) Davies, William Motquin, Kelly (Kent) Krajewski, Julie Perryman, Laura Gottfried, and Katie Gottfried; thirteen great grandchildren; five great great grandchildren; brother, Larry La Fave; sister-in-law, Joyce Bertrand; many nieces and nephews. Clifford was preceded in death by his wife, Dorothy; parents; one grandson, Scott Davies; sister-in-law, Sharon La Fave, and brothers and sister. Visitation at Malcore Funeral Home, 701 N. Baird St., Wednesday July 17, from 9 AM until the time of the Mass of Christian Burial at 11 AM at Saints Peter and Paul Catholic Church. The family would like to extend a special thank you to his caretakers, Theresa and Michael. In lieu of other expressions of sympathy a memorial fund has been established at the funeral home in his memory.

The family of Clifford La Fave created this Life Tributes page to make it easy to share your memories.