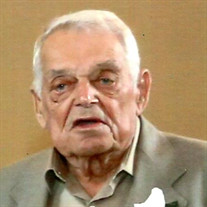 Clayton J. DeKeuster, 86, Green Bay, found peace, Nov. 20, 2018, while at a local hospital. Born April 22, 1932, in Green Bay, he is the son of the late Melvin and Lillian (Warrichaiet) DeKeuster. Clayton joined the Army National Guard in 1949 and was called to active duty in 1950. He served in Korea during the Korean War and was honorably discharged. Upon returning from service, he met and later married Shirley VanHemelryk on Aug. 20, 1955, at The Church of the Blessed Sacrament. Clayton worked as a machine tender at James River Paper Mill where he was known as “The Kid”. He retired in 1994 after 41 years of faithful service. He was a loving husband and devoted father-he took such good care of his daughter, Cindy, driving her many times to her appointments in Marshfield. Clayton is survived by his wife of 65 years, Shirley; four children, Cindy (Randy) Heim, Mike (Debbie) DeKeuster, Darrell DeKeuster, and Valerie (Dean) Noel; grandchildren, Lilly, Andy (Christina) and their children, Isabella and Joey; Sara, Jacob (Katie), Justin (Brittany) and their soon to be baby boy, Axton; one sister, Janice Deteinne; one brother, Harold DeKeuster; sister-in-law, Joannie VanHemelryk; brother-in-law, Tom VanHemelryk; and nieces and nephews. He was preceded in death by one sister, Remel (Ben) Duffeck; two brothers, Clinton and Melvin (Gesela); brother-in-law, Jim Deteinne; and sister-in-law, Betty DeKeuster. Visitation at Malcore (West) Funeral Home, 1530 West Mason Street, Friday, Nov. 23, from 4-8pm. Prayer service Friday at 7:30 pm at the funeral home. Visitation to continue Saturday, Nov. 24, at The Church of the Blessed Sacrament, 825 Webster Ave, from 9:30am until the time of the the funeral. Funeral Mass, 10:30am at the church with Rev. Michael Scolare officiating. Interment in Fort Howard Memorial Park with full military honors.

The family of Mr. Clayton J. DeKeuster created this Life Tributes page to make it easy to share your memories.

Send flowers to the DeKeuster family.