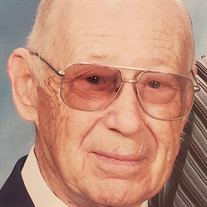 Clarence H. Ney, age 98 of Green Bay, passed away on Monday, August 9, 2021 at Autumn’s Promise. He was born on June 20, 1923, in the Town of Herman to the late Emil and Walaska (Stecker) Ney. Clarence was united in marriage to Violet Henningsen on October 12, 1946 at St. John’s Lutheran Church in Gibson, WI. Clarence was very proud and successful in life even with only an 8th grade education. He started with working on area farms and then got a job at the young age of 14 in 1937 at Lakeside Canning. After several years, working at the canning factory he proudly served in the US Army Air Corps from 1943 to 1945 in Kearns, Utah as a plane mechanic. Clarence continued to work with his hands after service becoming a maintenance supervisor for 25 years at Pauly Cheese where he worked for a total of 42 years. Clarence took various courses at NWTC and became a master electrician. His enjoyments included hunting, fishing, being a Packer season ticket holder since they played at East high School and above all spending time with his family and traveling. He was known for tinkering and working with his hands and would lend a hand to anyone that needed help. Clarence was a long time member at Our Savior Lutheran Church. During his time there he held many roles, which included, serving on the church counsel, as president for several years, trustee, usher and elder. Left to cherish Clarence’s memory are his daughter, Cynthia (Gerald) VanKauwenberg of Green Bay; grandson, Joshua (Jennifer) VanKauwenberg of Cecil; four great grandchildren, Brynn, Kynlee, Cade and Reid VanKauwenberg; brother, Harold (Jean) Ney of Shoto, WI; sister in laws, Dorothy Ney and Frances Doughman; numerous nieces and nephews; and special nephew and niece, Allen (Karen) Peckham. He was preceded in death by his parents; wife, Violet Ney; siblings, Helen (Rudolph) Bender, Louis Ney, George Ney, Caroline (Norbert) Malchek, Evangeline (Alfred) Engelbrecht and Nelson Ney; sister in laws, Lorraine (Delmar) Peckham and Carol (William) Hopf; and brother in law, Arnold (Hazel) Henningsen. A funeral service for Clarence will be held at 11:00 a.m. on Friday, August 13, 2021 at our Savior Lutheran Church (120 S Henry St.). Pastor David Hatch will be the officiant. Visitation will be held at the church from 9:00 a.m. until the time of the service. Clarence will be laid to rest at Nicolet Memorial gardens in the Shrine of the Good Shepherd Mausoleum. He will be honored there with full military honors. In lieu of flowers, please make donations to Our Savior Lutheran Church in Clarence’s name. The family would like to extend a sincere thanks and appreciation to the staff at Autumn’s Promise for all the wonderful care they provided through the years. They would also like to send a special thank you to his special friend, Jamie and to Unity Hospice, especially Dar.

The family of Clarence Henry Ney created this Life Tributes page to make it easy to share your memories.

Send flowers to the Ney family.