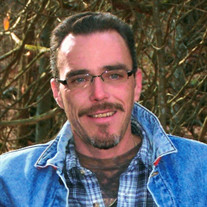 Christopher “Kip” Peart, 54, Iron River, MI, formerly of Green Bay, passed away on Feb. 11, 2021. Born on November 7, 1966, in Milwaukee, he is the son of the late Kenneth “Ken” and Joan “Terry” (Knight) Peart. Kip formed many friendships over the years while tending bar at Lothario’s/Shabooms and Redwood Inn, making the best darn Old Fashions. He felt most at home in the outdoors, which is what led him to Iron River, MI. Kip is survived by his two children, Jourdyn (John) Ahrens, Kaukauna, and their children, Gavin, Levi, and Ivy; Jon Peart, Denmark; siblings, Greg Peart, West Bend, Pam (Bill) Kinnard, Green Bay, Nikki Stathas, Green Bay; many nieces, nephews, other relatives, friends and also his beloved cat, Luna. He was preceded in death by his parents; the mother of his children, Kristine “Kriss” Peart; and his dear friend and father-figure, Karl. Gathering of family and friends at Malcore (East) Funeral Home, 701 N. Baird Street, Monday, Feb. 22, 2021 from 4:00 pm until the time of the service. Sharing of memories will begin at 7:00pm.

The family of Christopher "Kip" Peart created this Life Tributes page to make it easy to share your memories.

Send flowers to the Peart family.