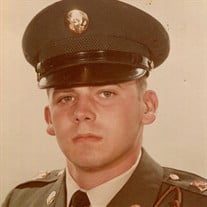 Charles “Chuck” Hagerty, 69, Green Bay, passed away unexpectedly, Friday, Sept. 8, 2017, at home. Born Sept. 4, 1948, in Green Bay, he is the son of the late William and Margaret (Fox) Hagerty. Chuck faithfully served in the US Army from 1968-71 and spent a tour of duty in Germany. He was a long time employee of Georgia Pacific (James River) retiring after many years of devoted service. Chuck is remembered for his great sense of humor, his love for the outdoors, hunting and fishing, and spending time with his family and friends. Chuck is survived by 6 nieces and nephews, Melanie and Erin Hagerty, Scott Swanstrom and Amy (Swanstrom) Eckstein, Michelle and Chris Hagerty; two sisters-in-law, Linda Jaloszynski and Joan Hagerty. He was preceded in death by his parents; brothers, Michael, William and Frederick Hagerty; sister, Kathy Swanstrom; and niece, Bridget Hagerty. Visitation at Malcore (East) Funeral Home, 701 N. Baird Street, Saturday, Sept. 23rd, from 9am until the time of the service. Memorial service, 11am Saturday, at the funeral home with full military honors to follow. Entombment of Chuck’s cremated remains will be in Allouez Chapel Mausoleum.

The family of Charles "Chuck" Hagerty created this Life Tributes page to make it easy to share your memories.

Send flowers to the Hagerty family.