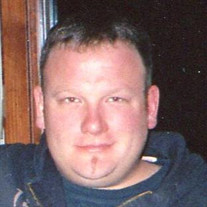 Chad Stencil, 42, Little Sturgeon, passed away unexpectedly, Tuesday, January 28, 2019. Born May 29, 1976, he is the son of Pamela (Wendt) Stencil and the late David Stencil. Baptized on June 27, 1976, and attended St. Paul Lutheran Elementary School in Green Bay. Graduated from Southern Door High School in 1994. Employed as a truck driver with MJT Trucking, a vocation he loved. Chad also had a career working with commercial and residential tile installation. He was a great cook and enjoyed entertaining his large circle of close friends. Chad is sadly missed by his mother, Pamela Stencil and his stepfather, Paul Grathen; siblings, Elliot Stencil and Kaila Stencil; stepmother, Shelley Stencil; maternal grandmother, Margaret Wendt; godparents, Leanne Radtke and Bruce Wendt; his canine buddy, Oliver; aunts, uncles, many cousins and many, many friends. Preceded in death by his father, David Stencil; grandparents, Robert & Rosella Stencil and Raymond Wendt; and uncles, Dan Stencil and Gerald Stencil. Visitation at Malcore (East) Funeral Home, 701 N. Baird St. Tuesday, Feb. 5, 2019, from 3pm until the time of the service at 6:30 pm which will be lead by Pastor Nathan Nass. Interment in Shrine of the Good Shepherd Mausoleum. Chad’s family extends a very special thank you to his many friends who brought him so much joy over the years. A memorial fund has been established at the funeral home in memory of Chad. “The Lord is my rock, my fortress, and my deliverer; my God is my rock in whom I take refuge;” Psalm 91:2

The family of Chadwick D. Stencil created this Life Tributes page to make it easy to share your memories.

Send flowers to the Stencil family.