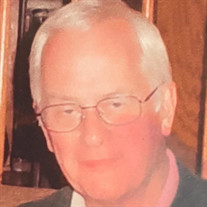 GREEN BAY – Heaven has gained a devout Christian and dedicated family man for whom dressing up in his Sunday best was as much an obligation and a joy as attending Mass itself. Bud Donovan, 85, passed away December 6, 2021, as a result of injuries sustained in an auto accident 10 days earlier. Bud was well-known for the professional speaking voice he developed during a DJ and radio career in Monroe, Wisconsin, and Dubuque, Iowa, from the 1950s into the 1970s. He set the standard for lectors at SS. Peter and Paul Church in Green Bay for decades and also served on the parish council. Bud was very proud of his family, Irish heritage, and extensive music collection. He accumulated thousands of CDs and vinyl albums from a wide range of genres. Music was always playing in the home, and Bud could honor any request by immediately walking to the exact spot in his collection to access the appropriate disc. Born John Walter (Bud) Donovan in Chicago on April 6, 1936, to Wally and Anne (Schwenke) Donovan, Bud became fast friends with his future wife, Murrie, at a young age thanks to the close friendship of their parents, who were in a theater group together. Bud remained a fan of the Chicago White Sox his entire life while eschewing the football team in Chicago in favor of the rival Green Bay Packers to the north. He was a graduate of Loras Academy and Loras College in Dubuque. His professional career included stops at Dorman Cheese in Monroe, Schreiber Cheese (later Schreiber Foods) in Green Bay, and ownership of the Curtis Mathis Home Entertainment Center in Green Bay for several years in the 1990s. Bud leveraged his knowledge of the dairy industry to create a path as an independent cheese broker and eventually became president of the International Cheese and Deli Association. He also served as president of the Green Bay Chamber of Commerce, and was a basketball coach and WIAA basketball official for many years. Bud is survived by his loving wife of 62 years and best friend for a lifetime, Murrie (Powers) Donovan; his children: Mike (partner Kathy Castellanos) and his children Kelli, Jon and Ryan; Kevin (Adele) and Kevin’s children Bridget and Kylie, and Adele’s son, Ed; Nancy (Dale Krause) and her children Mick and Cassie; and Peggy (Allan) Duffy and their children Quinn, Maggie and Regan. He is also survived by grandchildren Megan Johnson and Connor Lanz, the children of Bud and Murrie’s late daughter, Molly. Bud is further survived by eight great grandchildren: Megan’s Ali and Sadiq; Ed’s Bennett; Mick’s Kiera, Jaxon and Roice; and Cassie’s Summer and Julian; and Bud’s sisters-in-law Linda (Bill) Donovan and Marianne (Dick) Powers. Preceding Bud to heaven from his immediate family were his parents; brother, Bill Donovan; and daughter, Molly Donovan. The family would like to thank the care team at St. Vincent Hospital, especially Dr. Stephanie Bakey, for their skill and compassion during Bud’s final days. Visitation will take place at SS. Peter and Paul Church in Green Bay on Friday, December 10, from 9:30 a.m. until the funeral Mass at 11 a.m. Visit https://www.malcorefuneralhome.com/ to express online condolences. Click Link to View Event: https://youreventstream.live/streams/0c37-b3e6-56b4 **Once in the event, you will be prompted to enter your name. From there, simply hit play.

GREEN BAY &#8211; Heaven has gained a devout Christian and dedicated family man for whom dressing up in his Sunday best was as much an obligation and a joy as attending Mass itself. Bud Donovan, 85, passed away December 6, 2021, as a result... View Obituary & Service Information

The family of Bud Donovan created this Life Tributes page to make it easy to share your memories.

GREEN BAY – Heaven has gained a devout Christian and dedicated...

Send flowers to the Donovan family.