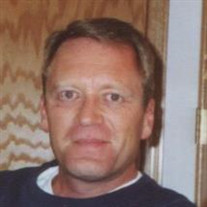 Bryan G. Pigeon, 58, Green Bay, passed away April 28, 2018. Born on March 25, 1960, Green Bay, he is the son of Gerald and Geraldine (Barrette) Pigeon. He graduated from East High School class of ’78. Bryan started his work career at Joann Fabrics at the ripe young age of 14. He then worked at Kmart, Kinney Shoes, Builders World, Marvin Windows, and then finally at Kolbe Windows and Doors where he worked for 19 years. Bryan received the honor of “National Salesperson of the Year” in 2003, 2004, and 2005. He retired in 2010 moving from Scottsdale to Payson, AZ. Bryan loved animals and dealing with people. He enjoyed traveling back to Green Bay during the fall. Bryan's favorite places to eat when he was in Green Bay were Krolls East, Rouers, and Cranky Pats. He is survived by his parents; three siblings, Kathy Hogan of Green Bay, Steve (Diane) Pigeon of Green Bay, and Mike (Colleen) Pigeon of Dallas, TX; partner, Joe Shiroda of Payson, AZ; niece Jenni (Chad) Wagner and nephew, Josh Borley; great nephews, Erik and Liam; many other relatives and friends. Preceded in death by his grandparents, Walter and Marian Pigeon, and Gladys Mraz and Joe Barrette; brother-in-law, Peter Hogan. Visitation at St Matthews Catholic Church, 130 St. Matthews St. on Saturday September 22, from 9:30 AM until the time of the Funeral Mass at 11 AM with Rev. Robert Kabat officiating. He will be interred at Allouez Chapel Mausoleum.

The family of Bryan Pigeon created this Life Tributes page to make it easy to share your memories.

Send flowers to the Pigeon family.