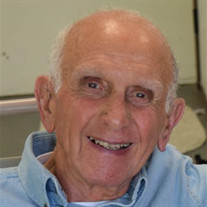 Bryan (Barney) Abraham Farah left us Friday, November 23rd, 2018 after a brief illness. Barney was born to first generation immigrant Lebanese parents Esber and Sophie (Shalhoub) Farah on April 20, 1925.  He spent his childhood in Green Bay, Wisconsin working in his family’s grocery stores where he learned that compassion and hard work is the success to life.    At 17 years old, he volunteered to serve his country during WWII.  His knowledge and love of science led him to train as a hospital corpsman in both the Navy and the Marines where he served in New Caledonia and the Philippines.  He is most proud of his time served, and his ability to make people feel better through medicine and food when he was able to sneak away to the kitchen and whip up special treats such as chocolate ice cream for his comrades and superiors.     After his time served, Barney returned to Green Bay where he met his future wife Ruth (Kollman) while managing the produce department at Farah Foods.  On February 10th, 1948, they were married at St. Patrick’s church in Green Bay.  Together they raised four children, Pat; Randy (Mary); Mark (Julie); and Rene’ (Bryan Pavlik).  They continued as members of the Farah family corporation which included grocery and liquor stores.  In 1948 Barney and Ruth moved on, purchasing the A&W drive-in franchise which included three locations in the Green Bay area.  This gave them the opportunity to fulfill their entrepreneurial dream of owning and expanding their own business.  Barney was known for being innovative for his time.  For example, he took a big risk converting the summer season car-hop operation to a self-serve fast food menu served year-round.  He brought the drive thru concept and fast food inside seating (previously only available on the West Coast) to the Green Bay area. Barney was featured in Drive In Management Magazine for his innovative ideas, which lead to a meeting with McDonald’s owner Ray Kroc to discuss future fast food opportunities. During the 1950’s local DJ’s broadcasted popular music from the drive-in rooftop. In the 1960’s many patronized the drive-ins for their weekly Packer specials reaching 14 burgers for a dollar.   After selling the franchise, he became a commercial realtor often helping others start their own business.    Barney stayed busy with his family and businesses but continued to be a philanthropist throughout the community serving on the Green Bay Jaycees, American Legion and VFW, and any way that he could donate his time.  One prominent event that Barney helped lead was the 1957 dedication of City Stadium, the new home of the Green Bay Packers (now Lambeau Field).    Together with Ruth, they enjoyed entertaining with family and friends for many occasions showing all how to cook the Lebanese way, always making “enough food to serve a Lebanese army” was the household joke.  He was well known for his large garden, love of fresh food and his home-cooked treats.  As a young child, he had a love for many animals and the outdoors, being an avid hunter and fisherman well into his 80’s.  Barney and Ruth enjoyed spending 50 plus years wintering in Marco Island, Florida where they made many close friends.  He became known as “the man from Wisconsin swimming laps” in the pool in January.     Barney’s legacy consists of hard work, compassion, love of family and his concern for the environment.  His legacy is embodied by the many people he has touched throughout his life and the many he loved.  One of his proudest moments was taking the WWII Glory Honor Flight to Washington, D.C.    Barney is survived by his wife of 70 years Ruth; sons Pat, Randy (Mary), Mark (Julie); daughter Rene’ (Bryan Pavlik). Grandchildren: Amy (Kevin Ziegler); Will (Jessica) Farah, Jon Farah, Jessica (Dan Dwyer). Eric (Tasha) Gwidt, Jason Gwidt, and Shawn Alexander; Great grandchildren: Jack, Keira, Morgan Ziegler; Nolan, Grace Farah; Samuel Bryan Dwyer; Sydelle and Eiley Gwidt. Further survived by his brothers Phil (Ruthie) and Carl (Pat); sister-in-law Carol (Kollman); his two beloved dogs Abe and Chance; many nieces and nephews, and family friends.     Barney was preceded in death by his parents Esber and Sophie; sister Alice; brother-in-law Basil Koury; brothers George and Don; sisters-in-law Doris and Fern; nine in-laws and their spouses along with nieces and nephews.  In lieu of flowers, donations are appreciated to Northeast Wisconsin Land Trust. Family and friends are invited to visit at Malcore (West) Funeral Home, 1530 W. Mason, Green Bay, on Saturday, December 8, 2018 from 1 p.m. to 4 p.m. A Prayer Service will follow at 4 p.m. Barney will be laid to rest at Allouez Catholic Cemetery. Special thank you to Dr. Gala, Dr. Gallion, Vicki and all the staff in the ICU at St. Mary’s Hospital for the wonderful care given.  A special thank you to his granddaughter-in-law, Tasha Gwidt, for all of her help during this difficult time. Malcore (West) and the V.E.T. Program are serving the family.

The family of Bryan "Barney" Abraham Farah created this Life Tributes page to make it easy to share your memories.

Send flowers to the Farah family.