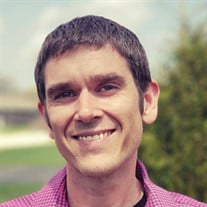 Brian John Houston, of West De Pere, passed away of unknown causes on Wednesday, Aug 21, 2019 at the age of 39. Brian was born Jan. 4th, 1980 to John and JoAnn (Zilles) Houston in Green Bay, WI. A lifelong resident of Brown County, he attended East De Pere High School and graduated from UWGB with a Bachelors in Computer Science. For more than a decade, Brian worked as an Applications Engineer for Humana Insurance. He is survived by his wife Andrea (Conrad), stepchildren Ava, age 15, Ethan, age 9 and Ira, age 4. Further survived by parents John and Jo Houston, sisters Natalie (Jason) Shikoski and Margie (Aaron) Stordeur, grandparents John V. Houston and Ermalee Zilles. Also survived by loving aunts and uncles, nieces and nephews. Brian was preceded in death by grandparents Beth Houston and Aloysius Zilles. A lifelong enthusiast of science, he was an avid reader of Carl Sagan and Stephen Hawking. Brian had a gift for coding and computer sciences, and in addition to his work with Humana he participated in the Google Code Jam every year, as well as developed application shortcuts in his free time. He enjoyed trivia immensely and enjoyed monthly trivia games (Team Denim Chicken!), and ended every evening with an episode or two of Jeopardy. Other hobbies included escape rooms, 5k and 10k races, woodworking, puzzles, and Pokémon Go! Brian was an exemplary family man, who doted on his wife and children, and who pursued challenges with intense passion. Brian was a considerate man, with a big heart, and a razor sharp sense of humor. He was a connoisseur of obscure electronic music, and a lover of Indian food, ice cream, and airplane packet peanuts. A Celebration of Brian’s Life will be held on Wednesday, September 4, 2019 from 6pm to 9pm at The De Pere Community Center (Spruce Room), at 600 W Grant Street. There will be no formal funeral services, or viewing. A memorial bench in his honor is planned at Voyageur Park in De Pere, WI. A memorial fund for his family will be established.

Brian John Houston, of West De Pere, passed away of unknown causes on Wednesday, Aug 21, 2019 at the age of 39. Brian was born Jan. 4th, 1980 to John and JoAnn (Zilles) Houston in Green Bay, WI. A lifelong resident of Brown County, he attended... View Obituary & Service Information

The family of Brian Houston created this Life Tributes page to make it easy to share your memories.

Send flowers to the Houston family.