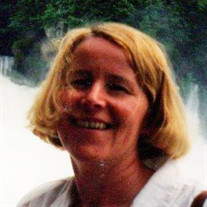 Barbara (Röhl) Siegel, 73, Green Bay, passed away January 30, 2019, after a long illness. Born on June 23, 1945, in Öhringen, Germany she is the daughter of the late Hans and Gertrude Röhl. She graduated from Ludwigsburg Hochschule, where she earned her degree in pedagogy to teach German and French. Barbara met Charles Siegel in 1971, in Ulm, Germany, where Charles was an officer in the United States Air Force. They were married March 10, 1972, in Stuttgart, Germany. In 1974 Charles and Barbara moved to Duluth, MN along with their son Mark and then the following summer to Green Bay, WI, where Charles was employed at Bellin Hospital. Barbara taught at Premontre High School and then was asked to be an instructor at St. Norbert College and taught German for 12 years. Barbara began the exchange program for German students. She also taught English as a foreign language to immigrants at the Literacy Council. She loved reading, shopping with her daughter, sunbathing, excursions and concerts in Door County, the opera, and traveling back to Germany to visit family. She was preceded in death by her parents; sister, Renate Van der Schyff and son in law, Nicholas Funari. Barbara is survived by her husband, Charles; three children, Mark Siegel, Scott and partner Landon Clark, Crystal Funari; grandchild, Zoe; brothers, Joachim Röhl, Tilmann Röhl, and Markus Röhl. Visitation at Malcore Funeral Home, 701 N. Baird St. Friday, February 8, from 1 pm until the time of the service at 2 PM. Reception to follow. In lieu of flowers please direct donations to the St. Norbert Fund. The family would like to extend a special thank you the staff of Unity Hospice.

Barbara (Röhl) Siegel, 73, Green Bay, passed away January 30, 2019, after a long illness. Born on June 23, 1945, in Öhringen, Germany she is the daughter of the late Hans and Gertrude Röhl. She graduated from Ludwigsburg Hochschule, where she... View Obituary & Service Information

The family of Barbara Siegel created this Life Tributes page to make it easy to share your memories.

Send flowers to the Siegel family.