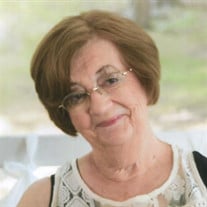 > Audrey Marie Dumas, 82, Green Bay, passed away unexpectedly on Friday, December 28, 2018, in her home. She was born October 24, 1936, in Green Bay, WI, daughter to the late Isadore and Anna (Roberts) Prail. She graduated from Green Bay East High School, and worked many years as a waitress at the Carlton Inn. Audrey married James Dumas in 1957, and he preceded her in death on September 3, 1988. Audrey’s greatest joy was spending time with her grandchildren and volunteering at their schools. She also enjoyed reading, playing cards, and flower gardening. She will be deeply missed by her 2 children, Lori (Mark) Lindsley, De Pere; and Chris (Kathi) Dumas, Green Bay; 5 grandchildren: Courtney (Justin) Roberts, Tyler Dumas, Sam Lindsley, Lilly Dumas, and Vince Dumas; 4 great-grandchildren: Silver, Karma and Emareya Dumas, and Eden Roberts; beloved niece, Connie (Jon) Jerry; and numerous extended family members. In addition to her parents and husband, Audrey was preceded in death by her son, David; sister, Beatrice and Earl Vanden Avond. Family and friends may visit Malcore (East) Funeral Home, 701 N. Baird St., Green Bay, on Wednesday, January 2, 2019, from 4:00 p.m. to 7:00 p.m., where there will be a Parish Prayer Service and sharing of memories by family and friends at 7:00 p.m. Audrey will be laid to rest next to her husband and son at Allouez Catholic Cemetery. Online condolences may be expressed at www.malcorefuneralhome.com.

The family of Audrey M. Dumas created this Life Tributes page to make it easy to share your memories.

Send flowers to the Dumas family.