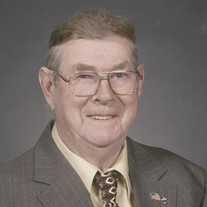 Ambrose Loritz, 91, of Luxemburg, passed away on March 10, 2019, at a local facility. He was surrounded by family and his loving wife of 56 years was holding his hand. He was born April 7, 1927, the son of the late George and Fannie Loritz. He often talked about running the farm with his mother, after the early passing of his father, George. Ambrose was only 10 years old when his father died, so that was quite an accomplishment. Even today that farm is still being run by family. Ambrose was a 1945 graduate of Luxemburg High School. On February 16, 1963, he married Shirley Van Stiphout. Shirley moved to the farm and they soon were blessed with eight children. Fannie helped with the babysitting and Shirley helped with the farm. Ambrose also spend many years working at Schreiber Foods in Green Bay. Somehow they made it all work. Ambrose was still helping out with the feeding on the farm just a few years ago. Among his final words he said "I gotta get up and go to the barn." His son replied to him "No, you rest. The boys will take care of it. He is survived by his wife Shirley and their eight children. They are Caroline (Andrew) Anderson of Edgar, Sherry (James) Benzshawel of Casco, Suzanne Loritz of Black Creek, George (Becky) Loritz of Luxemburg, Ambrose (Marsha) of Green Bay, Mary Kay (Randall) Zastrow of Green Bay, Sara (Paul) Fischer of Owen and David (Jolene) of Luxemburg. There are also numerous grandchildren and great- grandchildren. Along with his parents he also was preceded in death by his infant brother, George Loritz, Jr. Visitation at St. Thomas the Apostle in Sugar Bush, 5930 Humboldt Rd., Thursday, March 14, from 10 AM until the time of the Mass of Christian Burial at 11 AM. Burial at St. Amand's Cemetery. In lieu of flowers a memorial fund has been established.

Ambrose Loritz, 91, of Luxemburg, passed away on March 10, 2019, at a local facility. He was surrounded by family and his loving wife of 56 years was holding his hand. He was born April 7, 1927, the son of the late George and Fannie Loritz.... View Obituary & Service Information

The family of Ambrose Loritz created this Life Tributes page to make it easy to share your memories.

Send flowers to the Loritz family.