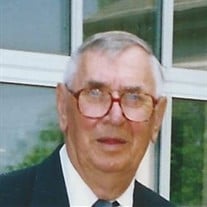 Aloysius “Al” Zilles Jr., 94, passed away December 30, 2018. Al was born in Green Bay on November 24, 1924 to the late Al and Della Zilles. He was a graduate of East High School. After serving in the Army in England, France and Germany during WWII, he married Ermalee Chesley on July 6, 1946. Al worked at Proctor and Gamble Paper Mill for 39 years, retiring in 1984. He spent many happy years wintering in the Rio Grande Valley of Texas, was an avid golfer, Packer fan, and a member of Our Saviour Lutheran Church. Al Zilles is survived by stepdaughter, Joyce Shepherd; son, John (Melanie) Zilles; daughters: Judy (Edward) Giesler, Jo Ann (John) Houston, Jane Zilles and Janet Zilles. He was also loved by 9 grandchildren and 11 great-grandchildren. He was preceded in death by his parents, brother Floyd “Bud”, sister-in-law Selma, sister Laverne Van Caster, and brother-in-law Robert. Visitation will be held Wednesday, January 2, 2019 from 9:30 a.m. to 11 a.m. at Nicolet Memorial Gardens, Shrine of the Good Shepherd, 2770 Bay Settlement Rd, Green Bay. The Funeral Service will follow at 11 a.m. with Pastor David Hatch officiating. The family would like to thank the caregivers at Bornemann Nursing Home and Unity Hospice for the loving care given to their dad. In lieu of flowers, a memorial fund will be established in Al’s name for the Alzheimer’s Association.

The family of Aloysius "Al" Zilles Jr created this Life Tributes page to make it easy to share your memories.

Send flowers to the Zilles family.