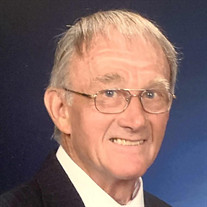 The red truck with the broom sticking out has pulled to the side of the road. All lawns are cut, leaves are all picked up, and sidewalks are all shoveled. With a glad heart, I was waiting for my call. Allen “Luke” R. Knaus, age 89 of Green Bay, laid down his rake and shovel on Wednesday, April 6, 2022. He was born on August 8, 1932, in Duck Creek to the late Fred and Etta (Bentley) Knaus. He was united in marriage to Shirley Process on June 13, 1964. Allen attended and graduated from Green Bay West High School. After graduation, he served two years in the U.S. Army as a E-4 Corporal. Allen had a wonderful job with Frito Lay for 35 years. During his time there he also tended bar at Club Chalet. After he retired, Allen took up landscaping to keep out of Shirley’s hair. Through the years he met and made many friends. One of whom was Pastor Richard Glock and his family. He and Shirley traveled to and with the Glock family quite a few times throughout the years. One time Allen drove over 1000 miles in a single day to visit them. Allen was a catcher of many years in the Old Timer Softball League. He was a member of the Die Hard Cub’s fan club. He was a life long bowler, starting as a pinsetter in his younger years. Allen played a lot of cards, and loved to read a good book, sometimes reading a whole book in one sitting. Left to cherish Allen’s memory are his daughter, Michele (Ken) Staszak; son, Nathan Knaus; four sisters, Gertrude Wright, Kay Cramer, Leone Rogers and Beverly (Lee) Nelson; sister in law, Sharon (John) Kielpikowski; and numerous nieces and nephews, too many to count. He was preceded in death by his parents; wife, Shirley; son, Steven Knaus; three sisters, Loretta Pierquet, Ethelyn Parafiniuk and Joyce Knaus; six brothers, Dale, Connie, Lloyd, Austin, Fred “Rusty”, and Merle Knaus. A memorial service for Allen will be held at 11:00 a.m. on Friday, April 22, 2022 at Our Saviour Lutheran Church (120 Henry St.). Pastor David Hatch will officiate. Visitation will be held at church from 9:00 a.m. until the time of the service. Allen will be laid to rest at Woodlawn Cemetery in Green Bay. In lieu of flowers please make memorials payable to Allen’s family. The family would like to send a special thank you to Sharon Kielpikowski, Barb Vandenbusch, the St. Vincent Emergency Room staff, the 9th floor nursing staff, especially Leslie, Al, Sheri, Kelly and Hannah and to Unity Hospice for treating Allen with dignity and respect.

The red truck with the broom sticking out has pulled to the side of the road. All lawns are cut, leaves are all picked up, and sidewalks are all shoveled. With a glad heart, I was waiting for my call. Allen &#8220;Luke&#8221; R. Knaus, age 89... View Obituary & Service Information

The family of Allen "Luke" R. Knaus created this Life Tributes page to make it easy to share your memories.

The red truck with the broom sticking out has pulled to the side...

Send flowers to the Knaus family.