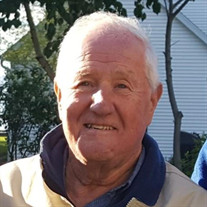 Allen George Falk, 82, Dyckesville, WI, began his journey to heaven on Wednesday, April 8, 2020 after battling Alzheimer's for many years. Allen was born November 26, 1937, to Harold and Edith (Black) Falk in Green Bay, WI. He attended Green Bay West High School and grew up on the family farm, one of seven children, on Military Avenue. Later he joined the Navy and was an air traffic controller. Al worked his entire career as a salesman for Eileen's Candies. Allen met the love of his life, Maureen Callahan in 1957 when she caught his eye walking down Willow Street. They were married on April 23, 1960, and would be celebrating their 60th Anniversary this year. They bought their first home on Thrush St. in Green Bay where they spent 32 blessed years. They enjoyed a home in Daytona Beach, FL where they spent winters for 10 years. Al loved the beach, whale watching club and flea markets. They moved to Dyckesville permanently in 2002 where he carried on a much loved tradition of celebrating the 4th of July on the Bay for family and friends. Al and Maureen were deeply devoted to each other through all these years and were shining examples of love, commitment, faith and family values for their friends, children and grandchildren. Al and Maureen enjoyed weekend outings and many activities such as dancing (won a few contests), bowling, playing cards and cross-country skiing. They were active members in their church, St. Jude Parish in Green Bay and St. Louis in Dyckesville where Al served on both parish councils. He also was a Eucharistic minister at St. Louis which he very much enjoyed. Allen had a great artistic side that was shown through his woodworking, art paintings, and many home improvement projects. Sailing was another love, where he enjoyed time with his brothers and dear friends Glenn and Jim on sailing trips and racing at the Windjammer's Sailing Club. He loved time spent with his kids; especially outdoor adventures and fishing with Todd, road trips to visit Laurie at college to share some bubbly or to Florida to laugh in the sunshine together, and with Brian to see who would be the victor in a game of golf or cribbage. One of his greatest joys and pride was in how his kids turned out. He was a man who was a great role model and taught his kids how to treat others kindly, love your God through your actions and learn by your mistakes. Allen is survived by his wife, Maureen; daughter, Laurie (William) Koelker, Ormond Beach, FL; sons, Todd (Denise) Falk, Dillon, CO and Brian (Becky) Falk, Neenah, WI; grandchildren, Aaron and Rachael Koelker; Jesse and Dylan Falk, Nicole Jean; Brianna, Baylee, and Brady Falk; great-grandchild, Kylie Vanstratton; brother, William Falk; sister, Carolyn Arcand; and sisters-in-law, Ruth Falk and Priscilla Falk. He was preceded in death by his parents; three brothers, Harold, Ray and Ernie Falk; sister, Adele Phillips; sister-in-law, Mary Falk; and brother-in-law, Donald Arcand. Due to the restrictions on social gatherings, a private family funeral will be celebrated at St. Louis Church in Dyckesville. the funeral can be viewed from the St. Louis Catholic Church Facebook page at: https://www.facebook.com/stlouiscatholicchurchdyckesville/ on Monday at 11am. In addition, please refrain from sending flowers to the church or home. The family extends a thank you to Allouez Parkside Village who cared for Al, especially Wendy, Tionna, Kassie, Rachael and the dedicated CNAs; also to his sister-in-law, Terry, for all her love and support in caring for Al. Malcore (East) Funeral Home is assisting the family.

The family of Allen George Falk created this Life Tributes page to make it easy to share your memories.

Send flowers to the Falk family.