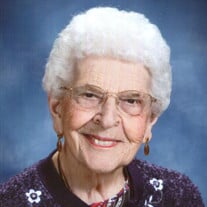 Agatha (Nickolai) Hendricks, 97, Dyckesville passed away at Helping Hearts Assisted Living with complications caused by COVID-19. She was born on October 5, 1923 in Dyckesville to Edward & Josie (Macco) Nickolai. Agatha was married to Walter Hendricks on April 17, 1945. He preceded her in death on November 12, 2000. She graduated from Luxemburg High School in 1940. After graduation, Agatha worked at the Selective Service Office in Kewaunee during World War II. She later worked for L.C.L. Transit Company and Pomp’s Tire & Recap for many years resigning due to family illness. Later, Agatha returned to the business world as a secretary for Dave Derenne Insurance and a part-time secretary for St. Louis Parish in Dyckesville. In 1989, she started working as a bookkeeper for her son’s business, LeRoy Feed Mill, retiring in 2009. Walter & Agatha enjoyed dancing, traveling, gardening, and playing cards. Agatha also enjoyed playing her accordion for parties, elderly meal sites, and nursing homes, and was a member of the Northeast WI Accordion Club at one time. She also was a volunteer at the Dyckesville Senior Citizen Meal Site and enjoyed meeting there once a week. Agatha was a lifelong parishioner of St. Louis Parish being baptized, received the sacraments, and was married there. She was their first lector and continued as lector and scripture reader until 93 years old. She is survived by a daughter, Kathryn Hendricks, Dyckesville, and a son, Kenneth Hendricks, Luxemburg; two grandsons, Kevin Schmidt, Algoma, and Christopher (Candee) Hendricks, Green Bay; great-grandchildren: Ashley, Kaylah, Trenton, Kahlisa, Aiden, Austin, and Haley; 1 great-great grandson, Avery. She is also survived by a sister-in-law, Bernice Kelnopher. She is preceded in death by her parents; a daughter-in-law, Linda (Giudice) Hendricks; a granddaughter, Amy Hendricks; father & mother-in-law, Stannie & Dolphine Hendricks; sisters & brothers-in-law, Vi & Charlie Adams, Mildred & Alvin Everard, Harvey & Ruby Hendricks, Richard & Roseabelle Hendricks, Elmer & Anna Hendricks, Alice & Peter Estel, and Harold Kilnopher. Agatha’s family would like to especially thank all of her wonderful neighbor friends for their “watchful eyes,” kindness, and help when she was living alone. Whenever the neighbors had their get togethers, Agatha would always bring her pineapple cake. Now, she is making that cake and turkey for Walter in Heaven. A heart-felt thank you to the staff of Helping Hearts Assisted Living and Unity Hospice for their compassion and excellent care provided to Agatha. In lieu of other expressions of sympathy, memorials may be made to St. Louis Church, Dyckesville, in memory of Agatha. Malcore (East) Funeral Home is serving the family.

The family of Agatha (Nickolai) Hendricks created this Life Tributes page to make it easy to share your memories.