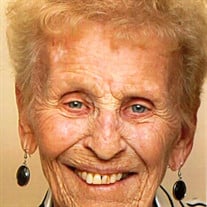 Agatha J. “Aggie” Georgia, 88, Green Bay, went peacefully to join her husband, Earl, on Saturday, Feb. 29, 2020, at home. Born March 21, 1931, in Green Bay, she is the daughter of the late Norbert “Red” and Eunice (Dantinne) Heim. Aggie is a graduate of East High School. She married Earl Georgia on April 21, 1951, at Saints Peter and Paul Church and he preceded her in death on August 13, 2009, after 58 years of marriage. Aggie had worked at H.C. Pranges before taking time off to raise her young and growing family. She later worked as a crossing guard for the Green Bay Police Department at Danz School for 21 years. Aggie enjoyed time camping with friends and family. She looked forward to spending time with her card club friends. Aggie loved doing crafts, especially painting ceramics, walking and traveling. Above all else, her grandchildren were the apples of her eye. Aggie is survived by three sons and their families, George and Margaret and their children, David (Becky), Michael (Johnna); Wayne and Susan and their children, Leslie (Ben) Hintz and Courtney (Peter Bergstrom) Georgia; and Craig and Jennifer and their children, Jacey (fiance’ Dylan Mroczenski) and Ben; further survived by two great grandchildren, Gavin and Madison; two sisters, Donna (Gary) DeBauche, Jody (Ken) Leemon; nieces, nephews, other relatives and friends. Preceded in death by her parents and her loving husband, Earl. Visitation at Malcore (East) Funeral Home, 701 N. Baird St., Thursday, March 5, 2020, from 9am until the time of the funeral. Funeral Mass 11am Thursday at Saints Peter and Paul Church. Entombment in Allouez Catholic Cemetery.

The family of Agatha "Aggie" Georgia created this Life Tributes page to make it easy to share your memories.

Send flowers to the Georgia family.